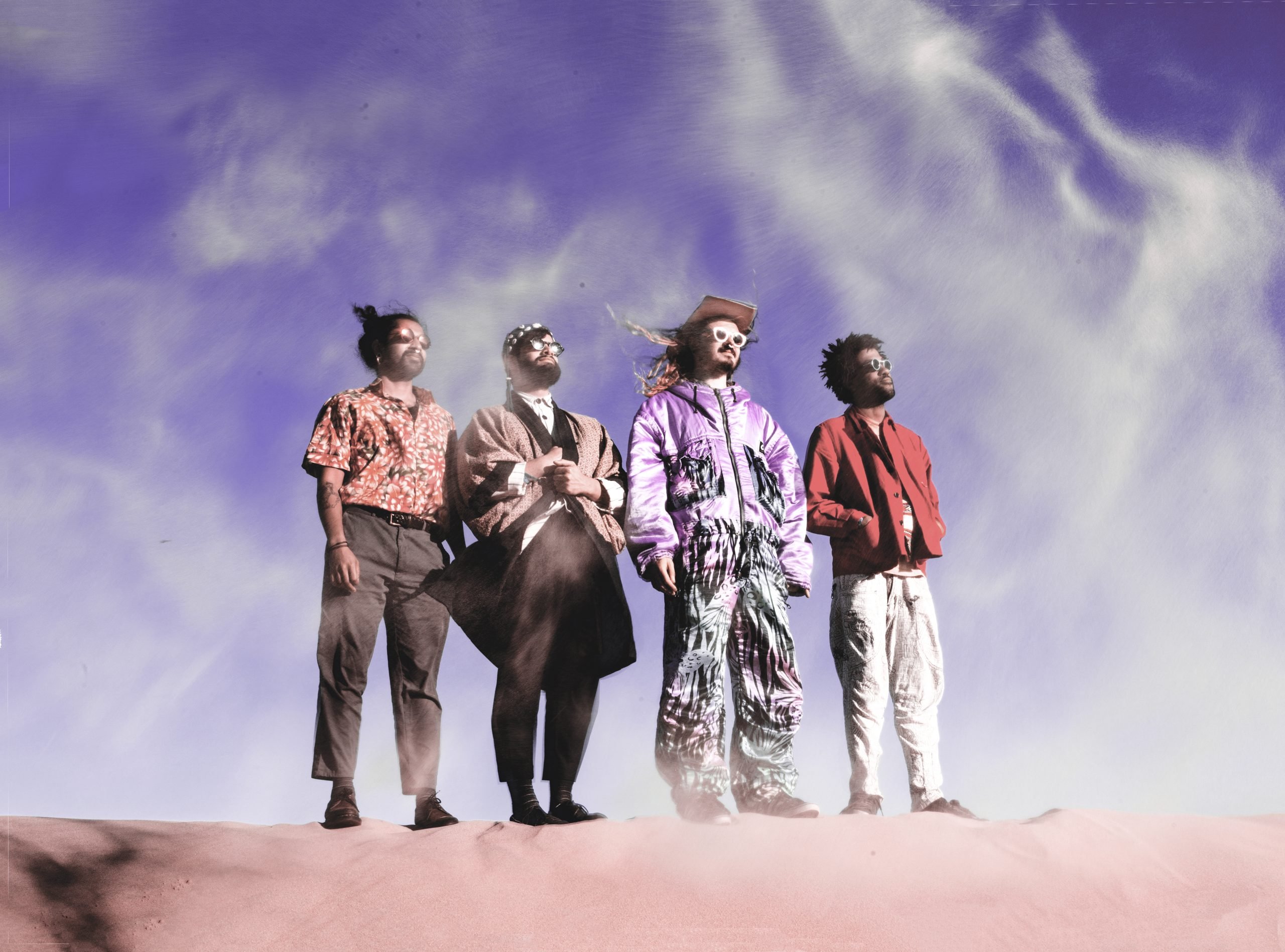 Flamingods’ art is rooted in a love for the spaces between cultures. They’re cross-cultural magpies, absorbing styles and instruments from the world over into their mesmerising sound. Originally started as a solo bedroom projec

Flamingods are sat together, collectively enthusing about the sheer joy that seeped through the band as they kicked off sessions for their celebratory new record Levitation. “It was like we were suddenly kicked with all this motivation,” says Karthik ‘KP’ Poduval from the band. “A great tour. A working visa! And all of a sudden we were together again, able to write music in a room for the first time in an age. You can’t underestimate how joyful that was…”

A lot has happened since the release of their breakthrough album ‘Majesty’ in 2016. For starters, all four members finally found themselves living in the same continent for the first time in four years. “When we were making Majesty I was still living in the Middle East, trying to sort out my UK visa problems,” says founding member Kamal Rasool, who grew up in Bahrain and formed Flamingods while living in London in 2009. “We’d gone through this brutal stretch of being away from each other, but then everything changed. I moved back as soon as everything got sorted, and the band just kicked off: we started this insane run of shows, and we didn’t stop for 18 months.”

It’s fair to say that none of the band expected their run to be quite that successful. It’s also no exaggeration to say that Flamingods only really discovered their true selves during the past two years. “We really became strong as a brotherhood while touring Majesty,” Kamal explains. “And that meant that when we were going into this album, the dynamic of the band had changed completely.”

At first, they decamped to Stephen Moshi’s Prah Studios in Margate for a session in mid-2017, where over ten days they came up with several “golden moments of clarity” and laid down the albums basics. Levitation is primarily a spiritual, symbolic record, but it’s also obsessed with the idea of seizing life with both hands. Just listen to joyous lead single Marigold, with its anthemic, proudly exclamation-marked refrain of “I feel alive! The sun’s glow is shining down on me”. As introductions go, it
certainly doesn’t hold back.

But there’s a real depth to proceedings here too, as Kamal points out. “There are two or three sides to every song on the record. A lot of the songs channel positivity, but there are also themes of mysticism, cultural identity and social observations within them too”

These aspects all take a central role on the record, from ‘Mantra East’s declaration from Kamal that “Getting stopped at airports reignites who I am”, to ‘Astral Plane’s  acidic tale of someone who’s left “hissing with fire”. But while it’s true that many of the lyrics on Levitation are drenched in sun-soaked imagery, the record is also very much set in the here and now.

One song in particular, the cathartic, album-closing title track, stands out in this
respect. Featuring Jenny Moore’s Mystic Business choir and clocking in at a mesmeric eight minutes, ‘Levitation’ is dedicated to KP’s father, who passed away during the making of the album. “I actually lost three family members during the process, including my father,” he says, before explaining that part of his way of dealing with his grief was to talk to Kamal. Both friends spent many nights together, and found that the new music they were creating was in some ways a reflection of the difficult situation around them.

“It really did influence the record,” says Kamal. “I was still writing lyrics at that point, and I was chatting to KP a lot about everything. He was giving me his dad’s old books and I was learning how much we had in common, despite the fact I never met him.”

“It’s just been a part of what’s been going on,” adds KP. “Fortunately, everyone was really supportive, but it did flavour what was happening with the album,
undoubtedly. The expression of joy and happiness is what I wanted to get across – rather than a sense of darkness and sadness.”

Musically, Levitation is easily the best collection of songs Flamingods have ever
released. Opening track Paradise Drive, with its elongated funk outro, is a glorious paean to the old, exotic Middle Eastern and Indian disco tunes of the early 70s that the band love to DJ during downtime, while Club Coco – written and sung by multi-instrumentalist Charles Prest – was tinkered with for years until its creator was finally happy with it (which is handy, as it’s now a true highpoint of the album, and a pulsating, invigorating beast).

“We were constantly thinking about how we can make this record better than
anything we’ve done before,” says Kamal when asked what the bands original aims for Levitation were back in Margate. “We’ve been on this path for years, often in difficult circumstances and it feels like it’s all led up to this. We’ve taken everything we learnt from being on the road and melded that into trying to make the best possible record we could.”

He’s not wrong: Levitation is a revelation, rich and layered with beautiful ideas and deep thoughts on the paths we all take. With any luck, it’ll also be the album that sees Flamingods take their place as one of our most treasured, articulate and forward thinking bands… 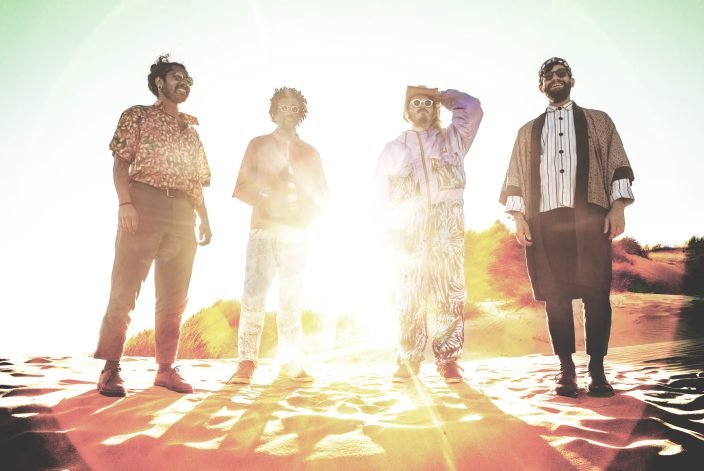 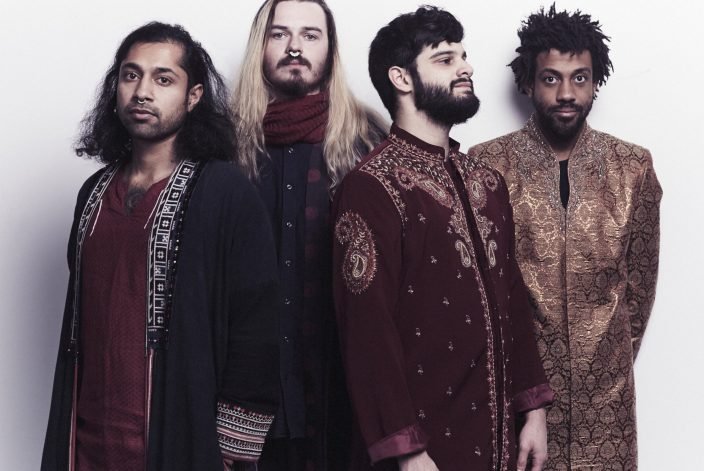 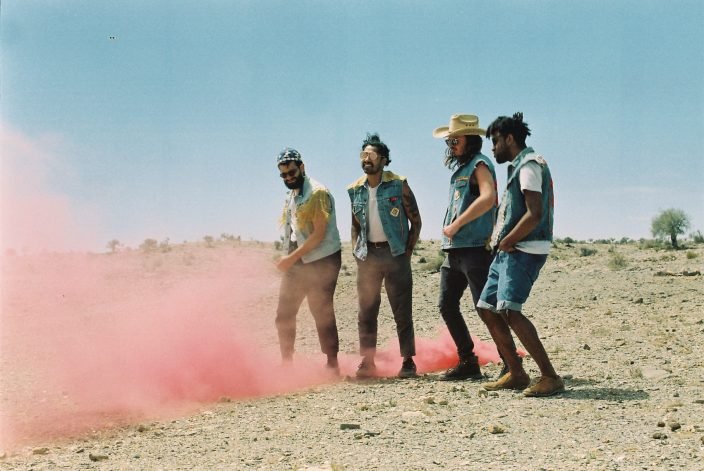